The fresh, light feeling of brand new post-marriage is starting to dissolve now, leaving in its place something reassuring and delightfully unfamiliar. This is the way I wanted to feel this time last year - it's the way I've thought I should be feeling ever since then, but have never managed to grasp it quickly enough for it to manifest itself as any sort of permanent or even semi-permanent way of being. Now I'm swimming in it, boring my new husband with it, getting drunk on it and allowing it to pull me out of bed on a Sunday morning (aided by a pot of Darjeeling, which is simply beautiful) for some quiet time before the 'us' part of this Sunday begins.

The morning after our wedding I woke in York's beautiful Cedar Court Grand hotel to an eerie silence. I was tired and sore after a night of ceilidh dancing, as well as starving hungry and pretty hungover, but aside from this all-over physical noise everything was unusually quiet. My head - for the first time in months, if not more - wasn't shouting out a list of to-dos and to-bes; instead it was lying there almost empty, calmly playing through the images of the previous day without any sense of urgency or even excitement. I was utterly at peace, with the sort of 'internal peace' that I've heard of often and until that point thought I understood, when actually it's possible that I hadn't had a moment's 'internal peace' until that morning after my wedding day. I had no wish to do anything or be anything other than what I was doing and being right there: no external pressures piled up the moment I opened my eyes, and I was struck by how unusual this was.

The next day we set off on our honeymoon in the Lake District, and by this point I had stopped feeling uneasy about the quietness of my mind and instead took it for what it was: urgently-required down-time. I had a week of this peacefulness, accompanied by happy conversations about the wedding, the engagement, and the future that we realised was suddenly ours to hold, all set against the back-drop of Lakeland mountains in late September. It was bliss, and everything we needed from our honeymoon - switching off and slowing down and re-connection and reflection, accompanied by a bounty of fresh air, real ale and amazing food. 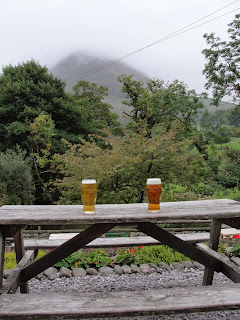 We returned home feeling that inevitable sadness that it was really all over, and that reality had to recommence as we always knew it would. But I also felt eager to get back into life without the wedding to think about, without an excuse to sail away on a daydream at 2pm in the afternoon to find myself inadvertently typing 'buttonholes' or 'alternative bridal footwear' into Google Scholar. I'd hated my distracted head in the run-up to September, and at times had really struggled to concentrate on some of the really big projects that I was involved in; my studies had sailed so far down my priority list, and I was starting to feel a little fraudulent and way too flippant about my PhD. But that's where we pick up now, three weeks after that morning of empty-headed newlywed bliss (and it feels so much more than three weeks ago), when I can safely say that my head is no longer empty or quiet, but instead is buzzing in a way very similar to those pre-wedding Sunday mornings when I had to get up and sort out the bunting or the order of service or try out my make up just one more time. Those thoughts have been replaced by big ideas and massive daydreams; a constant stream of ideas and exciting prospects that I'm dreaming up in the space that was for so long taken up by my impending marriage. I feel as if I've been granted space to plan my own future with more confidence, and things are forming before my eyes that I know have always been there, pushed to the side by thoughts frilled with white lace and studded with pearls.

In my wedding speech I said how Daniel made me believe I'm capable of anything, and that has never been more true than it is right now. It's probably a rather conceited thing to think, and an even more conceited thing to put into words for anyone to take hold of, but this feeling is such a strong one and it's available to everyone with enthusiasm and the right outlet in which to express it. I feel very much as if I've landed in the right place, after a year of feeling like an imposter in somewhere that was never quite what I wanted it to be, despite wanting it more than anything else in the world. It was a jarring contradiction of big dreams materialising and also somewhat of a let-down. It was scary, and I spent a lot of conversations with Daniel trying to justify the way I was feeling. Now I realise that my big dreams needed space to move and to grow, and that there was no space, only a crowd of increasingly overwhelming preoccupations. I feel right now as if my mind has been freed, and is finally ready for me to take on this ambition that I've been harbouring at the back of my mind for a year now. I finally feel capable, as if I have the tools, the support and - essentially - the space to build. Having felt as if I were on the edge of something massive for the past 12 months, I've now dived right in there, and am swimming contentedly, even drowning contentedly at times.
Posted by Catherine at 09:44 No comments:

I remember distinctly the conversation, driving through Pontefract in our old Ford Mondeo circa 1996, me carefully deciding on my old, new, borrowed and blue, much to my Mum's amusement (I decided on old flowers - at the time I had no idea about the decadence of weddings, especially not the floral element of it all). That day was, somehow, always going to be: a beacon of sorts on the horizon; the day I'd commit to that other human and my life would truly begin. There were the playground games: sitting in a tree K-I-S-S-I-N-G with some freckled boy standing on the other side of the rounders pitch, or the twisting of the apple stalk to discover the first initial of my future betrothed (I'm sure it snapped off at D at least once).

This idea stayed in my head throughout my entire wedding day; somehow, my life had always been moving towards this point when I'd choose someone else to share 'forever' with. It's another of those things that is pushed into our psyche by society and expectation and tradition and all of that, and one of the many things that I rejected outright upon realising the ridiculousness of it all. It suddenly became much less ridiculous, though, when I met Daniel, and when I realised that sharing a life path is neither easy nor obvious at times, and that these challenges can actually be fun and wondrous in their own way. I guess that what I mean is that I found somebody who made even the hardest bits of life (and there have been some massively hard bits over the past 5 years, that's for sure) somehow magical, and something inside me went 'pop' - right up there on that bridge over the M6 - and I was, in my own way that can't be put into words, committed. So I've been committed for a while now, and when it came to making those vows to Daniel in front of pretty much everyone we care about, it was the most natural thing I've ever done. The whole day was magical, each moment a complete surprise, but at the same time nothing about it was anything other than the absolutely normal thing to be doing that day.

I laughed the entire day, even though none of it was that funny really - it must be some sort of reflex that I have when presented with something utterly joyful (when Daniel proposed I'm not sure I actually even said yes, I just laughed uncontrollably and took the ring from his grasp). I haven't really stopped laughing for the past week-and-a-bit either, even though life has gone back to a very distinct normality, and it's raining, and the house is an utter mess. Because I thought that married life would just be like going back to how it was before, but with the slight inconvenience of a new ring each on our left hands. It turns out that I was wrong, and I'm glad I was; everything feels just a little bit different, slanted towards the future and big plans that we share now because we promised that we would. Everything feels a little bit more possible than it did before, and the future - by the very fact that it's not only 'mine' but also 'ours' - seems somehow more exciting, more of a mystery.

So married life: so far, so good. I thought I'd be terribly sad that the wedding was over and there would be nothing much to look forward to ever again (how depressing). But as my lovely newlywed friend Louise said on the day, there's a real satisfaction inside me now that we've had our wedding and that it was everything that we ever wanted. Now we can get on with the bigger, more exciting task of marriage and all the challenging things that it will inevitably bring. I like challenges, and I even have time for the massive life-changing ones, however scary they may be. It's just really nice to know that I have someone lovely there to go through it all with, with ultimate soup-making, bubble bath-running, husband skills that will surely be essential in the years ahead.

And for the record:

Old - my Great Grandma's eternity ring (as well as my Gran's engagement ring which I've been wearing since we got engaged)
New - pearl necklace and bracelet which my Mum bought to go with my dress
Borrowed - a cotton hankerchief of my Mum's with 'D' for Deborah (my Mum's name) embroidered on the corner. This was for the tears that never came (I laughed instead) and remained tucked in my bra the entire day.
Blue - a bead in my hair which my amazing bridesmaid Emma painted blue for me - the rest of the beads were pearl-coloured. Also, my Great Grandma's ring had sapphires around it.
Posted by Catherine at 10:45 2 comments: