Friday: some blanks, some grub and a photo!

I'm approaching the weekend tentatively as there is less than a week until my Big Essay Deadline (Thursday, 12 noon - eeeeek!). I'm not overly stressed as I've been working hard, and it's paid off, but still - I must endure at least one tough weekend through the process, and it will be this one! However, it's still Friday, which means I get to spend more than just a couple of after-work hours with my blue-eyed man, and so I'm happy!

Writing essays is hungry work. It will never cease to amaze me. And my appetite will continue to amaze me even moreso! There have been some exciting culinary moments through the week, two of which I will quickly share!

1. Fry onion and chicken until the chicken softens
2. Add garlic, mushrooms and pepper and cook until soft
3. Add tomatoes on top of vegetables and leave until the tomatoes are soft
4. Stir in olives and capers and add balsamic vinegar, then cook for a further 5 minutes
5. Season with black pepper and serve with wholemeal spaghetti 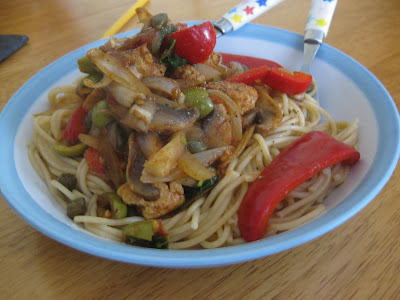 And one sugary, oaty treat!

1. Mix oats, nuts, banana and coconut together in a bowl and add waaayyy too much honey until it's all coated and sticky (and the kitchen, your fingers and your clothes are also sticky).
2. Spread onto a baking tray and bake at 150C for about 30 minutes until browned, making sure you jiggle the mixture around every now and then!
3. Stir in raisins and leave to cool (or just eat it all right now) 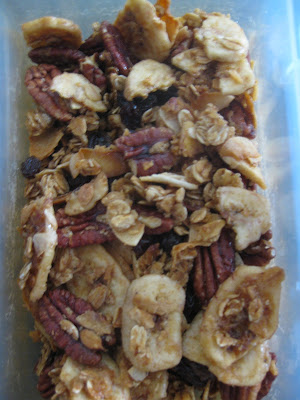 YUM!
And in true Friday style Fill in the Blanks Friday from The Little Things We Do! This week with a musical theme!

1. One song that always takes me back to my youth is "Baby Come Back" by The Equals! Me and my brother used to run around in a circle singing 'baby come back' over and over again...no idea why!
2. My first concert ever was The Backstreet Boys at Manchester Arena! I was in LOVE with Brian and my best friend loved Nick, so our Mums took us to see them when we got good results in our SATs. I was 10, and I couldn't believe how many people could be in one place!.
3. If I could create my dream music festival I'd want these bands to be there: It would be in the late 80s, and Green Day, Nirvana and REM would be headlining. The Smiths, Bikini Kill and The Raincoats would be there too - awesome!
4. The best make-out/"boot knocking" song ever is Nightswimming by REM .
5. The best concert I've ever been to was probably REM in 2008, as it really was a dream come true. However seeing Midlake, The Earlies and Dawn Landes in a tiny venue in York in 2006 (the night I met Tim Smith!!) was really really special .
6. A memorable musical moment for me was playing lead guitar in my first Battle of the Bands when I was 15. Just about the whole school was watching and for that single night I was really really super cool!

7. The song on my iPod that's getting the most play these days is I don't have an iPod! I'm a complete purist when it comes to music - I have some really old REM albums on vinyl, in fact! King Creosote is currently in my CD player, and I was listening to Midlake's new album last night, which is amazing! .


And finally, I thought I would share a photo from the Easter wedding of me in my finery, looking extra ladylike! 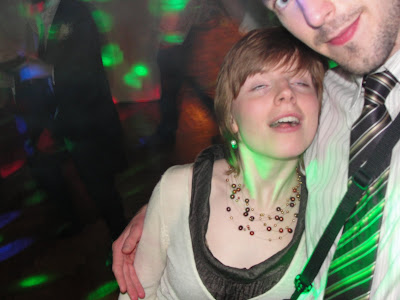 Hmmm...I think I was danced out by that point...or maybe it was the 3 glasses of champagne and surplus amounts of wine?

Have a great weekend!

from 'The Geese' by Mary Oliver