Apple and Ginger Flapjacks, and a Baking Drought

Since I moved back to York last year I have effortlessly lost over a stone (14lbs) in bodyweight, and am down almost two dress sizes. This has proved to be good and bad in equal measure, really: I was feeling a little too hefty this time last year, albeit a very happy sort of hefty, and all the nice clothes I acquired while I had a proper job with a real life salary are now hanging off me like very pretty sacks. Numerous family members have commented, inquiring into how (and why - since I wasn't exactly in need of any sort of weight loss programme) I have managed this miracle feat that so many seem to aspire to, and all I can say is "umm...I don't know really. I quit my desk job?".

But last week I was looking over some photos from the past 2 years, and the light in my head switched on, the choirs started singing, and the answer was suddenly clear. There was photo after photo of heavenly homemade treats: loaves of bread, cakes, biscuits, crumbles, pies and pizzas. Back in our apartment in Saltaire we had the sort of oven I have come to dream about, and during our time there I took full advantage. Of course, I haven't stopped baking since we moved back to York, but I now have to enjoy a very limited possibility of treats, thanks to the table-top micro-oven that we have been using since April last year. I will never forget our first evening in this house, when we had been hauling, lifting, unpacking and cleaning all day long. We had some posh pizzas ready for cooking up while we sipped on some celebratory Cava, and all was going to plan until the oven (rather retro in appearance, it has to be said) wouldn't light. We tried and tried in desperation, but it wasn't happening. So instead we pulled together and made a disappointingly healthy pasta dish, and set out the next day to get the only oven we could feasibly use in our tumbling-down kitchen: one of those microwave-cum-oven-cum-grill affairs that is never as good as it promises on the tin.

Now, it has to be said that the oven itself has been ok. We can roast veggies and make pizzas with no problem, and it definitely beats having no oven at all. But, as I discovered not long after we bought it, it just won't bake like a real oven. I've been reduced to only baking things that can be turned upside down, as it seems to have a problem with getting past the upper crust of any baking project. Bread is ok, biscuits are ok, even pies can work if you're careful, but cakes, buns, muffins, pastries and anything in a tray is out of the question. And so I need another hole punching into my belt, and my jeans hang around my bottom in a rather unsightly manner. Desperate times.

So this weekend, while enjoying the luxuries of my parents' home to their fullest possibility, I baked for the first time in what feels like months. It was a joy, it came almost without thinking, the ingredients falling together in the bowl as if graced by the presence of those fairies that cleaned Cinderella's house in the Disney film. My parents have an Aga, and a big beautiful kitchen which is just so much fun to bake in - the more space I have to dust everything in flour, the happier I am. I found some cubes of sugared ginger that were slightly past their 'best' (ahem) in the cupboard, and two apples that may or may not have been there since Christmas. Then, when I came upon a block of butter that was best before February I knew what I had to do: flapjacks it was. 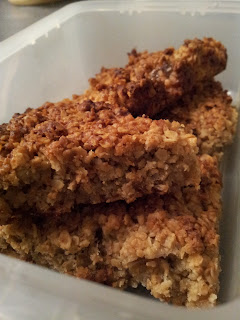 So unlike my usual recipes, this is not a healthied-up version of anything. It's proper bad-for-you (if you eat it all in one go) flapjack, which, let's be honest, is always the best thing for anyone on a Sunday afternoon with a cuppa and a newspaper. Even better during the day when a lovely husband-in-the-making brings on up on a plate with a milky coffee to help with your readings on neuroscience - try it and see!

1. Combine the oats and sugar in a large bowl
2. In a pan, melt the butter with the honey, then add this to the oat mix. Stir in the apple and ginger until combined.
3. Pour into a tin and press down with the back of a wooden spoon. Bake at 190C for 25 minutes until golden on top.
4. When the flapjacks have been cooling for 10 minutes, cut into 12 squares and then again into triangles. 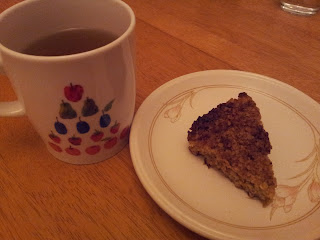