It has been an especially good running week, all things considered. I can't believe that it was only a week ago that I set out early, wrapped up in my warmest chill-proof gear for an 18-mile run in sharp, slicing winter winds. I decided to take a chance and do the run in my new shoes, having tested them out on a 10-miler the previous week. I was nervous, and doubting why I'd ever even signed up to do another marathon when the last one was so hard, and the training so all-consuming. After a lovely lazy Saturday I wanted so much to be still wrapped up in bed, hiding away at home from the extended winter that is on the forefront of every British person's mind at the moment.

I ran through Copmanthorpe and from there decided to take a route I'd never ventured before, through the village of Askham Bryan and then back into the city via Acomb. This was partly tactical - the less familiar the route, the less I had to think about the wind and the distance - and partly because this would be my last long run in York before the marathon, and I wanted to explore a few more new roads rather than sticking to the ones I already run on every day. As it would happen, Askham Bryan is one of the most charming places I've seen for a while, with the tiniest church, rows of crooked cottages, and a huge duck pond were bundles of small children wrapped up against the cold were feeding the ducks with their parents. It was a joy to run through the village, envisioning what life might be like if we one day decided to move out here and take on one of the ramshackle houses for ourselves. The route was easy to follow and it wasn't long before I'd racked up 10 miles, but the weather was getting worse and the winds were becoming unbearable. I didn't even bother to look at my Garmin - I just wanted to plough unthinkingly forwards and get home to a sugary cup of tea as soon as possible! At times the wind was screaming right in my face, making it difficult to even move forwards, never mind run. But once I was back on familiar territory at 13 miles I knew I had no choice but to keep going - my route was good, at least, and there were plenty of other runners (probably also training for marathons, I guessed, since no one else would be crazy enough to be out in those conditions!) to grimace at as we crossed paths. Whether out of desperation to get home or recklessness in the face of awful conditions, I found myself speeding up in the last few miles: a welcome energy boost had appeared from nowhere to help me through the breeze blocks of tiredness and freezing wind.

I arrived home aching in that sickly sort of way that comes with high mileage - everything hurt, but my lower back and calves in particular were screaming out, helped on by wind burn on my face and sharp pains in my lungs. According to my Garmin I had made the 18-mile route in 10-minute miles, which I still can't quite believe since I was almost walking into the wind at certain points. It did give me a real boost though, since I hadn't crawled the last mile either, but had found plenty of energy to finish the run the same way I'd finish any short run - with enough energy to get up and do it all again the next day.

And that I did, with a nice short recovery run on the Monday. It was supposed to be a slow one, but somehow that didn't feel natural to me so I stuck to my normal gentle running pace and didn't worry about looking at my watch. After a longer run on Tuesday I'd stacked up 30 miles in 3 days, but was still feeling good despite being incredibly busy and unable to sleep thanks to nerves over the impending move to Sweden.

After two days off during which I rested and then travelled to Stockholm, Daniel and I had a fabulous run around the island of Sodermalm on Good Friday morning. It is much colder and icier in Sweden than it was when I left the UK, but the sun is shining and everything feels so relaxed and spring-like - the streets were calling out to be run on! We mistakenly had a huuuge breakfast at the hotel buffet before we set out, so we took it easy, and even stopped to sit by the frozen water for a little while and balk at the people walking their dog on the ice! 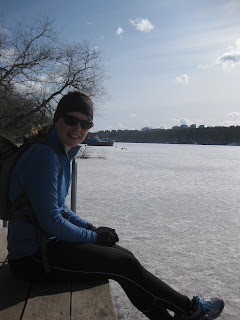 The next morning I was all moved in to my new flat, so we set off before breakfast this time, not wanting to make the same mistake of the previous day's regurgitated eggs and yoghurt. We ran out by the nearby water through a forest (wow I am so lucky, it's like the Scandinavian dream here in Danderyd), then tied in a hill session before heading back to the flat. There are some marvellous hills right on my doorstep, so I did 10 uphill repeats, up to the Swedish flag in someone's garden and then right the way back down. Thanks to the layers of grit covering the roads at the moment it's not particularly easy underfoot, but the hill is steeper and anything I could use in York: you win some, you lose some, I suppose! 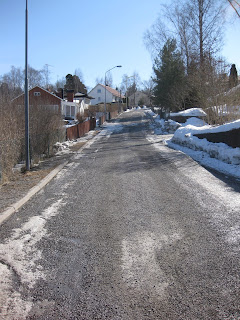 I surprised myself on various levels this week, first with the ease of the incredibly difficult long run, then by the continuing energy over the next few days, and finally by managing to rack up over 40 miles during a week of serious upheaval. I'm already looking forward to tomorrow's 20-miler and the coming weeks of exploring this lovely place! 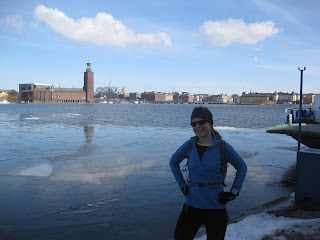