After completing Haweswater Half Marathon for the first time in March last year I was sure that - along with Keswick in May, Worksop in October and the Brass Monkey in January - it would become one of those races that make up my yearly running calendar. In my eyes it's pretty much the perfect race: relatively small, beautiful scenery, a nice time of year - an introverted atmosphere where people who simply love running simply run, without the horns and wigs and garish distractions of many bigger, more 'corporate' races. It's a 'there-and-back' route, running out to the far edge of Haweswater, looping around the small car park and then leading back in to the village of Bampton, just outside Penrith. Despite that, it works (and I have done there-and-back routes in the past that simply don't work at all): Haweswater is just beautiful, a reservoir set in some of the less grandiose Lakeland scenery with a backdrop of forests and snow-topped fells which still look untouched. It's actually one of the few places in England where you could hope to see a golden eagle. Runners get to enjoy views towards the mountains on the way out, and views over the water on the way back in again, so in this case at least the route's doubling-back on itself feels more like a buy-one-get-one-free opportunity than a cop out. 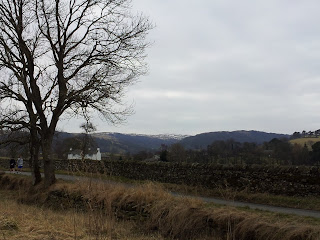 We arrived in Bampton over an hour early but the clubhouse was already buzzing with runners registering and psyching themselves up for the race. The car park is a short walk away from the facilities, and I was struck as soon as I stepped onto the grass by how fresh the air tasted; I hadn't been to the Lake District since the previous September, and I felt my senses lighting up with all of the sights, tastes and smells that I had missed - it was certainly good to be back. The hills in the distance were still covered in snow, and it was distinctly chillier in Bampton than it had been in Yorkshire when we set off at 8am, but it was a nice sort of chilly that I wanted to be out in - running, preferably. Still, I was nervous and had no idea what to expect from myself. After 6 weeks off running and two very hard weeks with too much painfully slow running, I was convinced that it was not going to be my day and that I just didn't have it in me to comfortably see myself through a half marathon. Still, I was going to give it my best shot. 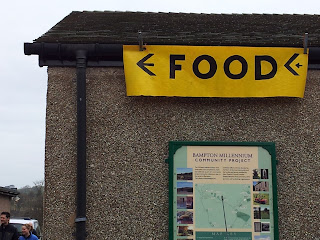 I got my warm up jogging back and forth and back and forth again to the toilets, no thanks to my nervous tummy which strikes me down every time I do a race (and I've been doing them for almost 5 years now); I probably covered a mile or so before even setting off to the start line. After much dithering about the cold I decided in the end to stick with my plan of box shorts, long sleeves and gloves, knowing that I'd have to face the chill for a while at the start but would probably run faster to get warmed up! Finally we were jogging our way to the start line, weaving among other runners and their support teams and breathing in the excitement, adrenaline and deep heat as we went. I joined the huddle of runners waiting to get going, moving towards the back but not as much as I would have in the past, and listened in to the conversations taking place around me. The ladies to my right were discussing the Windermere Marathon: I was amongst friends! A race organiser stood up on the wall to greet us, shouting (no need for a megaphone here) out the precautions that we should take and then, all of a sudden, "GO!" And we went! 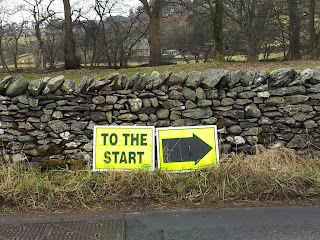 That first-moment-of-the-race feeling hit me like a barrel: my mind fell down between my feet and my stomach inverted itself, and suddenly I was running and doubting that I could run and overtaking because I knew I could actually run, and then I started to breathe and to listen to the hundreds of footsteps and that lull of silence in the first moments of the race, and my pace and breath began to work in time with one another, finally. We passed through the village to cheers, then out onto the country roads which were almost empty of cars, and the first mile passed in exhilarating seconds. Well, maybe not seconds, but under 8;30, anyway, which was much faster than it should have been, but I was flying and didn't want to stop. Then the 2 miles sign flashed up ahead, just before the first steep hill of what would be a hilly 13 miles, and my confidence plummeted. I crawled up that hill, leaving all of my premature energy to be trampled at the bottom; my legs didn't want to go and my whole body burned with tiredness and frustration, and even then, not even 3 miles in, I was wondering if I should have the first of my energy gels to curb the gnawing feeling in my empty stomach. I was both plodding on and giving up at the same time, fighting with my mind to decide how I'd take the next 11 miles. I was too hot and annoyed at my long sleeves, and the man behind me was exhaling with incredible drama which was putting me off no end. I let him pass, and as I turned on to the road next to the water a cool breeze came my way. Feeling much better about it all, I decided to give it everything.

And so the road moved underneath my feet and I managed to break my pace back so that, 5 miles in, I was averaging at under 9 minutes/mile: I knew that if I kept it going I'd be getting a PB, but the question was how I'd do it! The hills kept on coming, with shorter and shorter intervals between each, and my only consolation was that I'd get to run down them on the way back. There were a good few downhills, too, where of course I could enjoy an injection of speed on the way out, but would be pulling back the pace again when I came back up them in a few miles' time. And so it kept going and going, driven forward by the scenery and the promise of the next mile marker. I looped around the small car park at 6.75 miles, looking forward to an energy gel at mile 7 but dreading the long uphill that was to come.

I had planned to take a gel at miles 7 and 10, so as soon as my Garmin beeped I tried to rip the top off the first gel with my teeth. The pack ripped but not enough to break a hole into the sachet, and eventually I had to stop and try and prise apart the packaging with my front teeth (just thinking about that is making me squirm!). I kept on running while taking the gel, but felt so mixed up and disoriented from stopping that I had to stop again just to gather myself and finish the gel. Frustrated, I shoved the sticky packaging down the front of my top and kept on going, with a long incline to tackle with my newly gel-fuelled legs. And it worked: the hill felt like nothing compared to what I was expecting, and though I lost too much time messing with the gel (that mile came in at 10 minutes - such a waste) I was able to pick myself up and get back to the nice pace I'd been running at beforehand.

And so the miles kept coming and with each I felt a little more confident to push myself as hard as I could. I decided to forget the gel at mile 10 and just push through instead, given that I wanted to get to the finish line with all teeth in place. At mile 11, just as we'd left the scenic waterside route, "Another one bites the dust" blared out from a car parked by the side of the road, and onlookers cheered on runners enthusiastically. I felt great - on top of the world - and by this point I knew I'd make a sub-2;00, and maybe even a PB. Around mile 12 an old lady on a bench assured me that it was "all easy from here - lots of downhill now", I thanked here and gave it that little bit more. Then I saw my Dad, sitting on a wall eating his post-race flapjack; and then over the hump bridge and back into Bampton, where some young female stewards cheered me on, encouraging me to beat the man in front (I didn't quite manage that one). The street was lined with people clapping and cheering, and so I ran and ran, feeling suddenly self-conscious about it all: my bright red legs and snot-streaked face, and probably also my 'intense effort' expression which I imagine is not my best look. As I crossed the line I heard a steward shout out my number and time, "251, 1 hour 56 [I don't remember how many] seconds]": I'd managed it, not only sub-2;00 on a bad day, but also a personal best, and, better still, I'd had a really amazing time doing it.

I collected my Haweswater Half Marathon mug and flapjack, and as I was warming down a man came up to me to congratulate my effort; "I was trying to catch you for the last 3 miles, but couldn't do it", he said. I was pleased! 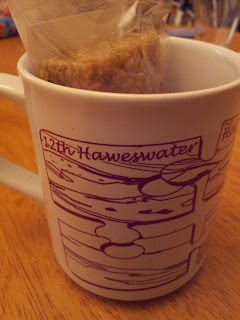 For me, this race was everything about why I run. Finally I'm starting to see myself getting better and more confident as a runner, and its paying off in terms of my enjoyment of races and my sense of pride in how I run them. Only 4 years ago I ran my first half marathon in almost half an hour longer than I did this one (OK, so it was Keswick, which is a killer), and for a long time I couldn't imagine a time when I might break that elusive 2 hour mark. I'm not fast, and probably never will be, but the boost that came with that 1;56 and the man behind me's comment wouldn't be any bigger had I beaten 1;30. I always say that running is awesome because it shows the human capacity for improvement, but the best thing is that this just keeps coming and coming: I'm still improving 5 years later, and hope to keep doing so for some time yet!