Jane Tomlinson is a well-known name in Yorkshire, but I expect those further a-field are less familiar with her plight and her achievements. 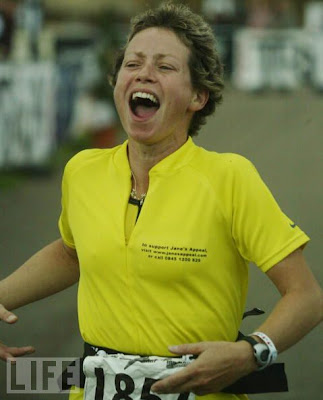 By all accounts, she was an amazing lady; after being diagnosed with terminal cancer, she went on to compete in running, cycling and swimming events all over the world, and her energy and spirit continues to give hope to people almost 3 years after her death.

I remember the day she died; it was headline news in the Yorkshire area, and though I'd never met her I felt a real sense of loss and grief that she was no longer with us. The headlines all said 'Jane loses her battle with cancer', but I still can't bring myself to think that was the case; surely, if anything, she won her battle with cancer, if not by overcoming it, but by challenging it head-on, and against all odds going on to achieve things that even the fittest of us wouldn't dare try.

On Sunday, the second York 10km Run For All takes place, which was set up after Jane's death by her husband and children. Jane herself started this event in Leeds, and it's continued to grow ever since, as four annual Run For All events have now been set up across Yorkshire.

Last year I took part in the Run For All in aid of Jane's Appeal; it was my first race, and it was enough to get me hooked - seriously, it was incredible! This Sunday I'm taking part in this year's event, which is much bigger than the last one, and I'm super excited! To add to the fun, Daniel and my Dad are both taking part too - Daniel's first race event, and my Dad's first 10km race. We've been training hard, which hasn't been easy when working full time (and in my case, packing in 2 part time jobs into the evenings and weekend, too), and I'm hoping to beat last year's time by 10 minutes. Honestly I don't think I'll do it; I'm simply too tired, but I'll give it my best shot, promise!

We've been raising money for Jane's Appeal, and I've set up a Just Giving Page to make it a bit easier (better late than never - I meant to get round to this weeks ago!).

Click here if you fancy donating a few pennies, but otherwise, watch out for photos of a sweaty girl in too-short shorts after the weekend - this is an advanced warning ;-)


I'll be back later with some blanks and random typings :-)
Posted by Catherine at 09:07